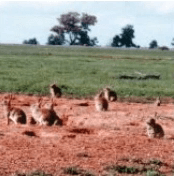 Did you know that rabbits are one of Australia’s major agricultural and environmental pests, costing between $600 million and $1 billion annually, eating pasture and crops, competing with native animals, causing soil erosion, and preventing regeneration of native vegetation. The rabbit is a restricted invasive animal under the Biosecurity Act 2014.*

Seasonal conditions have been conducive to an increase in the rabbit population.

North Burnett Regional Council Acting Mayor, Cr Faye Whelan, said that there has been an increase in sightings of the pest and that a recent release of calicivirus near Monto had been very successful.

“Following the release of a new strain of virus last year, Council would like to coordinate a program with land holders commencing in March to help eradicate these pests.  The virus is approximately $100 per vial and once opened needs to be used.  The deployment of the virus with property owners in a programed way enables Council to minimise costs and optimise community outcomes,” Cr Whelan said.

Cr Whelan urges interested rural land holders to express their interest in participating in a coordinated program by contacting Council’s Senior Land Protection Officer or Natural Resource Officer by phone on 1300 696 272 (1300 MY NBRC) or email Council.

For further information on rabbits see the Queensland Government website.