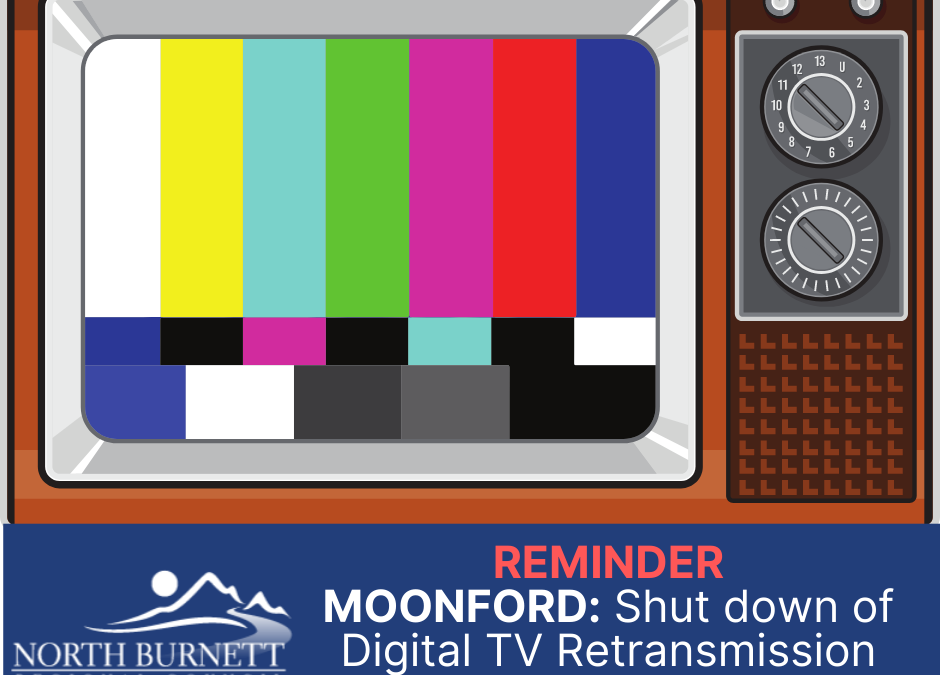 North Burnett Regional Council has operated the Moonford and Bukali/Bancroft television broadcast towers since 2006 and the Eidsvold tower since 2011. Council previously made the decision to be a television rebroadcaster to try to increase the accessibility, quality and affordability of television reception in these areas.

During recent years, the equipment at these towers has deteriorated along with the quality of service, with many viewers having to deal with poor-quality signal, pixellation, audio popping and interference while trying to watch their favourite sport or shows. Technology has also changed significantly in this time with many community members now sourcing their entertainment and news through other means.

The equipment at these towers has now reached the end of its life and needs to be replaced. Replacement would require significant expenditure at ratepayers’ expense.

At its General Meeting held on 28 April 2021, Council resolved to decommission all digital television retransmission equipment at its Moonford, Bukali/Bancroft and Eidsvold transmission towers on the following dates:

As Council has no way of knowing if residents are still using these rebroadcasting services, Council has previously written to landholders with property located within the approximate service area of one of these towers. If landowners do not receive TV signal over an antenna from these towers, there will be no change to your service.

Council recommends that affected households and businesses begin making arrangements with your local installer to switch to the Australian Government’s Viewer Access Satellite Television (VAST) service. VAST is designed to provide metropolitan-comparable television to rural and remote Australia with no ongoing costs.

What does this mean for affected households and businesses?

We understand that there may be concerns or questions regarding this process, so we have developed a list of Frequently Asked Questions below.

If you require further information regarding the installation of the satellite television service, please contact your local antenna installer or electrician.

Council has made the decision to decommission its TV retransmission services at Moonford, Bukali/Bancroft and Eidsvold between January 2022 and January 2023.

Households and businesses in the Moonford, Bukali/Bancroft and Eidsvold town areas who access free-to-air (FTA) television networks through an antenna from one of Council’s towers.

There will be no change for viewers that access FTA TV through satellite, Internet streaming or alternate means, nor for anyone in the Biggenden, Gayndah, Monto town and southern district (including Mulgildie), Mt Perry or Mundubbera areas.

Some Foxtel set-top boxes include the ability to receive FTA TV channels over antenna, so households and businesses in the affected areas will not receive those FTA signals after decommissioning but will continue to receive their other Foxtel channels as normal.

How do I know where my TV is transmitted from?

Look at your antenna and see if it is pointing towards one of the towers:

Why has Council made this decision?

TV viewing habits have changed dramatically in the years since the towers were constructed. FTA TV is no longer the primary source of entertainment for many viewers and Council does not consider TV retransmission as part of its core business.

Ageing equipment at the towers is contributing to regular failures that result in extended partial or complete outages of some services. With no opportunities for external funding, replacement of this equipment would come at significant expense to Council and all ratepayers.

How to we switch to satellite television?

VAST is a satellite television service entirely funded by the Australian Government. It is available to areas that have no suitable antenna signal, so households and businesses affected by this process are now eligible to join. VAST carries the same programming as regular FTA TV, plus more, so households won’t miss their favourite shows or news.

Residents who wish to have a VAST service installed are encouraged to contact their local antenna technician or electrician for advice. More information is available at mysattv.com.au.

Council encourages affected households and businesses to arrange to switch well before the nominated decommissioning date to allow for any installation delays.

How much will this cost?

VAST has no monthly cost, but households and businesses wishing to access it will need to pay for the installation from their nominated installer.

The cost will vary depending on the equipment required and time to install. Please discuss this with your installer.

What equipment do I need?

At a minimum, access to the satellite TV service requires a VAST-approved set-top box, satellite dish of at least 65cm diameter and an activated smartcard.

An existing unused Foxtel dish and cabling may be suitable to use, however your installer will need to confirm this.

Registration with the VAST service is required prior to your smartcard being activated. Your installer may arrange this on your behalf and more information is available at mysattv.com.au.

Is satellite the only option?

Accessing the VAST service is the only way to gain access to traditional FTA television services for affected households and businesses.

Internet-based streaming is available via broadcasters’ apps and websites for households and businesses with Internet connections that can support it.