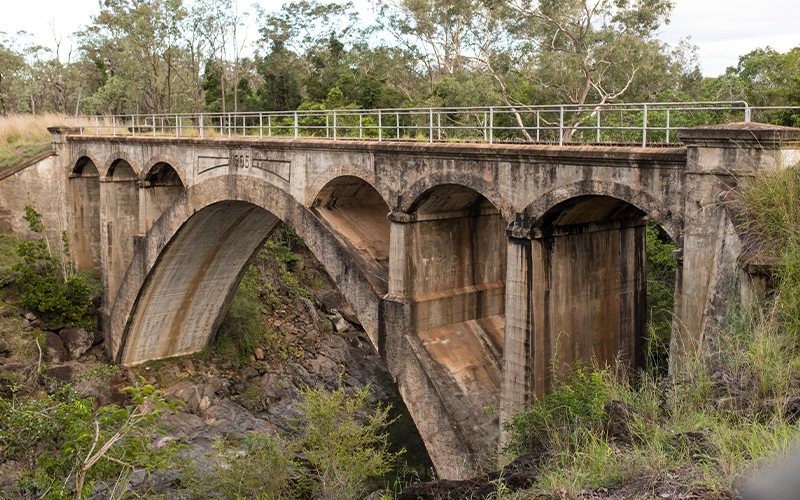 Gold was discovered in the 1880s and Biggenden grew as a service town to the short-lived gold fields at Paradise and Shamrock. The township of Paradise now lies under the water at Paradise Dam.

The Pioneers Walk and Hall of Fame at Beiers Park shares the story of Biggenden’s settling and pioneering families and honours their contribution to Biggenden and surrounding community. Set amongst a beautiful garden and huge Bottle Tree, the covered picnic tables are great for a morning tea or lunch stop, and to admire the larger than life Pioneers Sculpture in the park too.

The top floor of the former Paradise courthouse was relocated to Biggenden after the Paradise gold field was exhausted. It became Biggenden’s police station and courthouse and is now home to the Biggenden Museum.

The railway from Maryborough reached Biggenden in 1891. Chowey Bridge, the first of its kind in Australia, was constructed for the railways and opened in 1905. This concrete bridge is located around 18km west of the town and is supported by a main 27m concrete arch and a number of smaller arches.

The Museum promotes the history of Biggenden and the surrounding district with displays of historical items and contains photographs and memorabilia collected since its opening. A new shed houses farming implements and items pertaining to the outdoors and life on the land. 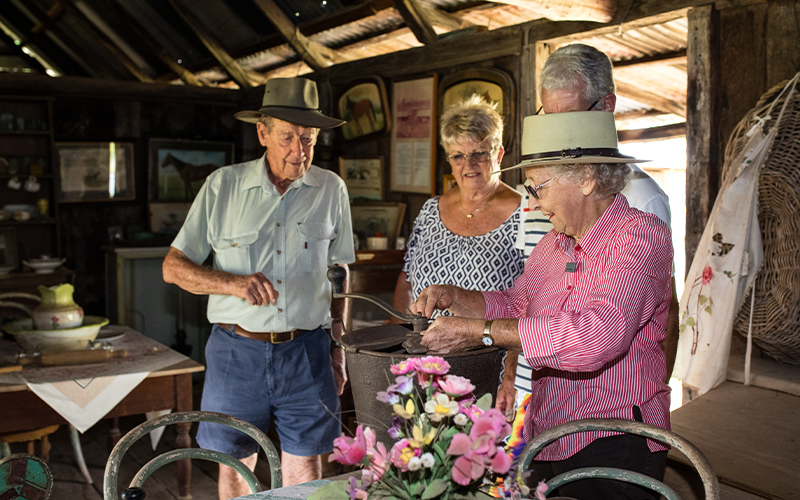 Originally founded in 1848, the town takes its name from Eidsvoll, Norway where the European settlers, Thomas and Charles Archer originated. They established two large stations, Eidsvold and Coonambula. Archer Homestead, the home of the pioneering settlers, rests on the banks of the Burnett River – just as it was over 100 years ago. Situated 8km west of Eidsvold, the homestead can be viewed by appointment.

In the 1880s, Eidsvold was a bustling gold mining town supporting a population of over 2000.

Marvel at the hard work and effort put into the historic stone pitched bridges located west of Eidsvold on Camboon and Eidsvold-Cracow Roads. The bridges are no longer suitable to take traffic, however they still stand, honouring the people who toiled to make them the memorable feature they are today.

The attractive Ceratodus rest area just north of Eidsvold on the A3 Burnett Highway – the “Country Way” – houses memorabilia from the old Ceratodus railway siding days. Ceratodus is the name given to the unique lungfish found in the Burnett and Mary Rivers. A cairn to commemorate the Traylan Native Police barracks takes pride of place in the grounds.

The Eidsvold Historical Complex is home to a fine collection of historic buildings, including the Knockbreak homestead, Riverleigh Cottage which houses memorabilia including the Eidsvold Soldiers’ corner, a display of photographs, medals and equipment from the various wars, traditional owner’s artifacts, slates and desks and other school equipment and a manual telephone exchange and the original Clonave homestead.
The museum also houses the George Schafer Geological Collection and the Schultz and Duncan bottle collection.

One of this country’s true icons, R.M. Williams, was born in South Australia and in the early 1950s moved to “Rockybar”, a property west of Eidsvold. Some of his descendants still live in the district to this day. The R.M. Williams Australian Bush Learning Centre is currently being developed to honour this great Australian, showcase his achievements, reflect his passion and promote rural job opportunities through education and skills development. 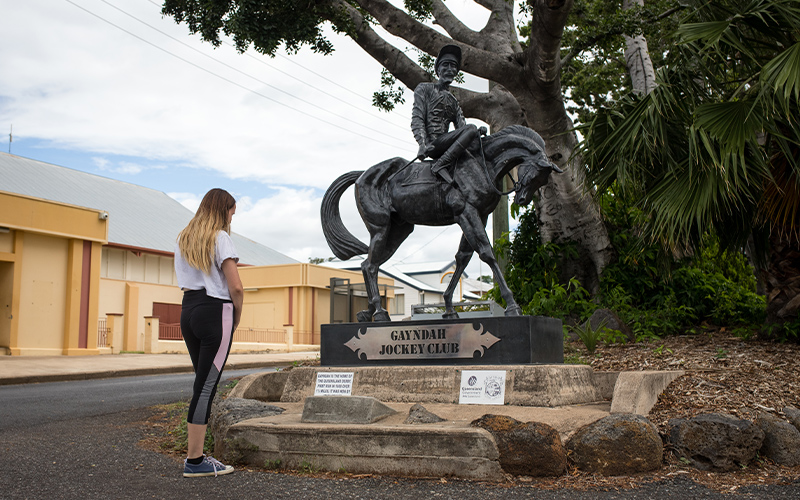 Gayndah lays claim to being the oldest town in Queensland and was first settled in 1849, maintaining its old fashioned charm to today. Several buildings have been heritage listed including Mellors Drapery (one of the few buildings in Australia which still uses a “flying fox” to deal with transactions), old section of the State School, Gayndah Soldiers’ Memorial Hall (Town Hall and Council Chambers), racecourse and several rail bridges.

When visiting Gayndah, don’t miss the Museum. It is one of the finest historical museums in Queensland. The fascinating collection of memorabilia is extensive and covers many aspects of early life in and around Gayndah.

A highlight is the renowned static and live display of the history of the Queensland Lungfish known as Ceratodus. The display was produced by the Queensland Museum believing this was the appropriate place for the display because Gayndah was the centre of scientific studies surrounding the Lungfish.

While only found alive in the Mary and Burnett Rivers, Lungfish fossils have been found all over the world. Dr Thomas Bancroft of Eidsvold undertook early studies into the Ceratodus and from this study believed the fish to be in great danger of extinction. The Queensland Government, in an act of early conservation, placed a full protection order on the species in 1914.

Time your visit for one of the working days and see a steam powered sawmill operating. The Museum complex comprises several restored buildings which have grown around the heritage listed Georgian brick cottage built in 1864. These buildings, including part of the old Ban Ban homestead and the Barambah Creek School, house a most comprehensive collection of memorabilia and historic relics including an old motorised rail ambulance used in the 1940s and 1950s, a completely restored school classroom and a military display. 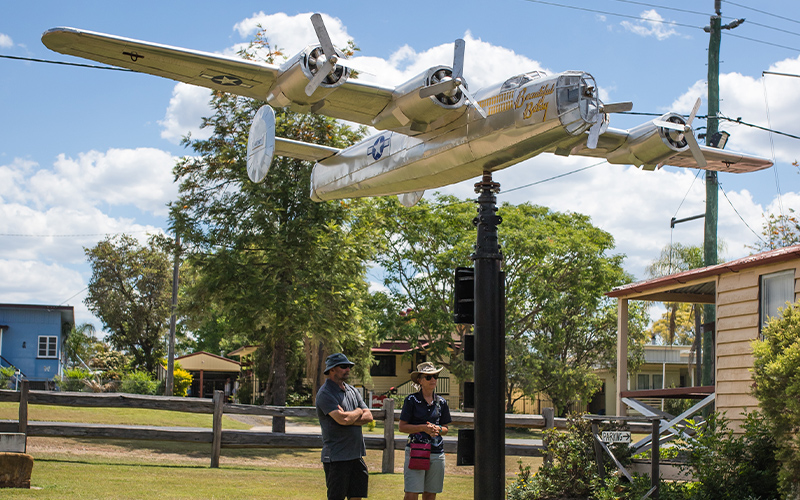 White settlement is said to have started in 1850 with AH Trevethan taking up land that became known as Rawbelle Station. This was the first of a number of large sheep properties to be settled in the next ten years.
The goldfields of Cania and Monal were operating and towns had developed around these deposits.

The township of Monto came into existence in 1924 as a consequence of the Land Development Scheme. A few very large properties were resumed to provide prime agricultural land for returning soldiers and pioneer settlers. Construction of the first town buildings commenced around 1926 and in 1931 the railway was officially opened.

Clark Bartlett was one of the early pioneers. and his hut is now on display at the Cania Gorge Tourist Park, together with a miniature of the Cania goldfields.

Visit the historic Monal Goldfields and the abandoned machinery. View the stone memorial at the Monal cemetery that was constructed using the wheels from the boiler that was pulled to the site by a team of 52 horses, and is dedicated to the memory of the settlers and teamsters who the area could not have been settled and developed without.
Built between 1939 and 1940 by builder Maxwell Lohse, the Monto Community Hall is of particular merit. The architects were Hall and Phillips. Francis Hall was one of Brisbane’s most successful architects of the early 1900s, and also designed Brisbane City Hall, Tattersall’s Club and Sandgate Town Hall.

A visit to Monto is not complete without a stopover at the Cultural and Historic Complex and Museum reserve. Here you will find a variety of historical displays including memorabilia of Monto’s Olympic Welterweight representative and an outstanding mineral collection. View local artifacts that have been donated by the community and preserved and restored by the members of the Historical Society. The Cultural Complex also holds regular art and craft exhibitions.

Stroll along the Lister Street Art Walk in the beautifully landscaped Lister Street Parkland, right near Monto’s central business district, and view the metal and stone sculptures created by local and regional artists. 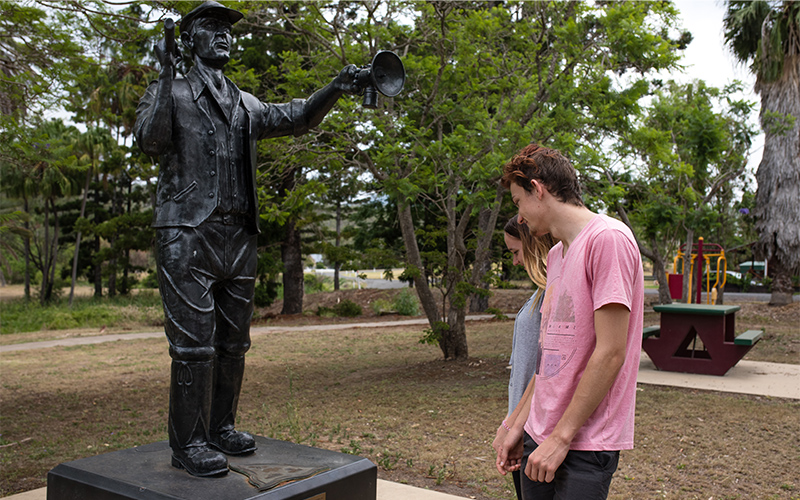 Settlement began in the late 1840s with the taking up of large sheep grazing stations. Sheep gave way to cattle due to the spread of spear grass after the big mobs ate out the natural grasses.

Mining activity began in the 1860s. The discovery of rich copper deposits led to a boom as news of the strike spread. In its heyday, Mount Perry boasted some 25 hotels. These did not last, and by 1876 the town had settled down to six regular hostelries.

As the land was cleared for mining operations, it spawned another industry – timber, which was used by the mines and for housing. Good stands of pine, cedar and hardwoods attracted many timber getters who used their horse and bullock teams to snig out and haul the logs that had been cut from the ranges.

Traces of gold had been found since early settlement but for years the main mining income came from copper ore. Copper mining ceased in 1913, however the remains of smelters can still be seen today.

The first gold was found on “Swindon” cattle station at Mt Rawdon.

Today, a statue of a miner stands in Maynard Park. The cast image acknowledges the long history and contribution of the mining industry in Mount Perry and commemorates Queensland’s150th birthday in 2009.
The Pat Augustine Cultural Centre houses an historical display, art gallery and the public library. The display includes photographs of Mount Perry district dating back to the late 1800s, and information relating to businesses and families over the years. The Art Gallery is operated by the Mount Perry Fine Arts Group and artists from around Queensland regularly hold exhibitions in the gallery.

Reflect on the past at the Mount Perry Bicentennial Museum which features a working blacksmith’s shop and a variety of memorabilia including an old fire engine, cart and other pieces of local historical significance. Located next door is the historic Madsen’s Kitchen, which shows just how different life used to be.

Follow the Heritage Walk to relive some of Mount Perry’s history. Heritage trail brochures are available from most Mount Perry businesses, or any tourist information centre or Council office. 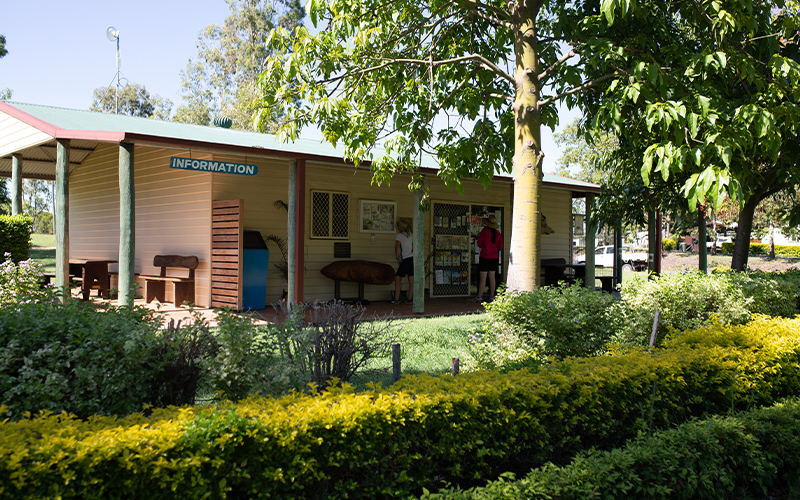 The word “Mundubbera” is an aboriginal word meaning either “footsteps in the trees” or “meeting place of the waters”. Both explanations are suitable, as there were once numerous “footstep” trees in the area, and Mundubbera is located at the meeting place of the Burnett, Boyne and Auburn Rivers.

White settlement began with the taking up of four stations in 1848. In 1863, the survey of the first town of Mundubbera was carried out on the south side of the Burnett River.

Closer settlement occurred in 1910, when much of the country was cut up into smaller blocks. Settlers established their farms through the area under extremely difficult and trying conditions, clearing the thick scrub and heavy timber. The second survey of Mundubbera town commenced in 1912, and occurred on the northern side of the river.

Cattle grazing has occurred in the area since the earliest times. During the two World Wars, cotton growing became an important industry providing a considerable source of income, but is no longer grown. Dairying was, and still is, another important industry. The Butter factory was opened in 1916 and ceased operation in 1980.

Bicentennial Park is home to a steam train, a tree grown from a seed gathered from the Lone Pine at Gallipoli and the Heritage Information Centre which contains several displays on early settlement and various local industries.

Visit the Mundubbera & District Historical Society’s Museum which is full of echoes of times gone by. Appreciate the fascinating past of the pioneers of the district. Open on request, the Museum houses historical machinery and buildings as well as many local collections.

The Mundubbera Regional Art Gallery was opened in April 2008. The Gallery comprises two galleries and foyer. Many exhibitions have been held including works by local and regional artists. The Gallery is open weekdays from 8.30am to 4.30pm (closed for lunch 11,30am – 12.30pm) and Saturday 9.00am to noon.