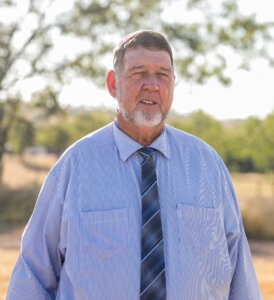 Today, I would like to sincerely thank the residents of the North Burnett community for their show of support and the opportunity to represent them and lead the region as Mayor.

Regardless of how you voted, thank you for taking part in this democratic process. I would like to acknowledge my fellow candidates Melinda, Susan, John and Kevin for standing up for your communities and putting your hat in the ring.

Some people may ask why I would want to take on this task. This is my story.

My childhood was one of a relatively normal upbringing where a lot of families lived on small holdings and struggled to make ends meet. However, I do not believe that our struggles ever brought us to a point of not being able to put food on the table. What it did do was make us very much aware not to waste anything that we were given. I wish to acknowledge the sacrifice that my parents made for our family to survive, be clothed and to gain an education that surpassed theirs.

I commenced work with Monto Shire Council under the Shire Clerk John (Jack) Ernest Pointon and Deputy Shire Clerk Gary Patrick Williams (both deceased). They invested in to provide sound leadership with integrity. Since then, I have served under four Shire Chairman’s/Mayors from 1967 to 2008 and 2 Mayor’s under the amalgamated North Burnett Regional Council, all of whom worked tirelessly to serve our community.

I wish to acknowledge all past Mayors/Chairman, Councillors and staff of all of our former shires and the amalgamated North Burnett Region.

Many have said the position of Mayor is an impossible task. I see the position of Mayor as a challenge, and I do honestly look forward to the challenge and working with my fellow Councillors and through the CEO, our staff, to achieve positive outcomes for our region and to see Council move forward at a pace that we can realistically afford.

I believe all Councillors have an important role, not one of us are perfect nor do we individually have the attributes of the combined council. As a united team under my leadership, I commit to chairing meetings that will produce:
• Respectful debate when differences of opinion are shared
• Resolutions based on sound governance and policy
• In accordance with regulations and facts and
• Provide positive outcomes for community.

Each and every Councillor has a responsibility to be informed on topics raised for consideration for decision making. We all have a role in advocating to both levels of Government to achieve the best outcome for our region, noting that with advocacy, respect and diplomacy is paramount.

My current term is only for two years, however during that time I commit to lead and represent this region to the best of my abilities.

I can be contacted at any time and commit to return your calls and correspondence as soon as possible.