A full day of frocks, fascinators, breakfast with barrel horse races, cocktails, canapes, a new public art piece unveiling and a phantom race of past Melbourne Cup winners are all part of the line up for the 2016 Emirates Melbourne Cup Tour through the North Burnett on Sunday, 31 July.

The once in-a-lifetime tour will see the iconic $175,000 18-carat gold trophy travel from Monto to Eidsvold and will commence with a ‘Breakfast of Champions’ from 8:30am at Monto Race Club. Aspiring jockeys can literally test their metal on ‘mechanical’ horses made from 44-gallon drums as they ‘race’ each other in the Monto Melbourne Cup.

“We’ve relied on the barrel horses when our actual races were rained out. People love them because they’re a great novelty and great fun,” Ms Williams said.

The Cup will then move on to Lions Park where Monto Rotary will host a morning tea with gold coin donation.

At 10:30am, the community will have their first opportunity to see the new Ken Russell bronze statue dubbed ‘Monto Marvel, King of the Coast’, which has had a significant facelift, thanks to funding received through the Australian Government under the Stronger Communities Programme, the Regional Arts Development Fund, and North Burnett Regional Council.

Following community requests to upgrade the deteriorating fibreglass statue, a new, life-sized bronze statue has been created by contemporary artists Gillie and Marc Schattner, to honour the Monto-born jockey who tragically died while racing in 1993. At the request of Ken’s family, the original fibreglass statue will be relocated to Mr Russell’s former racing track at Rockhampton Race Club, where it will be restored by the club.

Following the official statue unveiling, Monto Historical and Cultural Complex will host a family fun day and luncheon, with a historical display of Mr Russell’s racing memorabilia and children’s activities.

After departing Monto for a private visit with Ridgehaven clients and a quick ‘selfie’ with the Mulgildie Bunyip, The Cup will make its way to the RM Williams Australian Bush Learning Centre for a Country-style afternoon billy tea with damper.

The horsing around continues with Cocktails and Canapes with The Cup from 4:30pm with the grand finale; a phantom race call held at 6:45pm.  Twenty-four past Melbourne Cup winners including Subzero, Might and Power, Prince of Penzance, Media Puzzle and Makybe Diva will all burst out of the ‘hypothetical’ barriers in the race of a lifetime, called by local race caller Tony Becker.

Organised by Monto and Eidsvold Race Clubs, Monto Rotary, North Burnett Regional Council and community volunteers, this year’s Tour will see the $175,000 trophy travel to 34 towns and cities across Australia and New Zealand, before returning to Flemington for the ‘race that stops a nation’™ on the first Tuesday in November.

Monto and Eidsvold were chosen to host the Tour for the commitment made by the North Burnett Regional Council to provide a comprehensive schedule of activities for the entire community to enjoy while the Cup is in town.

All events are open to the public and are opportunities for people of all ages to see The Cup and possibly have their photo taken with it. For more information about the events and activities planned for the 2016 Emirates Melbourne Cup Tour visit, contact North Burnett Regional Council on 1300 696 272 (1300 MY NBRC) or email admin@northburnett.qld.gov.au.

Community members are encouraged to upload photos with the Cup to Instagram, using the hashtags #PeoplesCup and #EmiratesMelbourneCup, for the chance to win a trip for two to Flemington for the running of the 2016 Emirates Melbourne Cup.

The ‘Kenny Russell Memorial Statue Upgrade – Monto’ project is supported by funding from the Australian Government under the Stronger Communities Programme.

The Regional Arts Development Fund is a partnership between the Queensland Government and North Burnett Regional Council to support local arts and culture in regional Queensland. 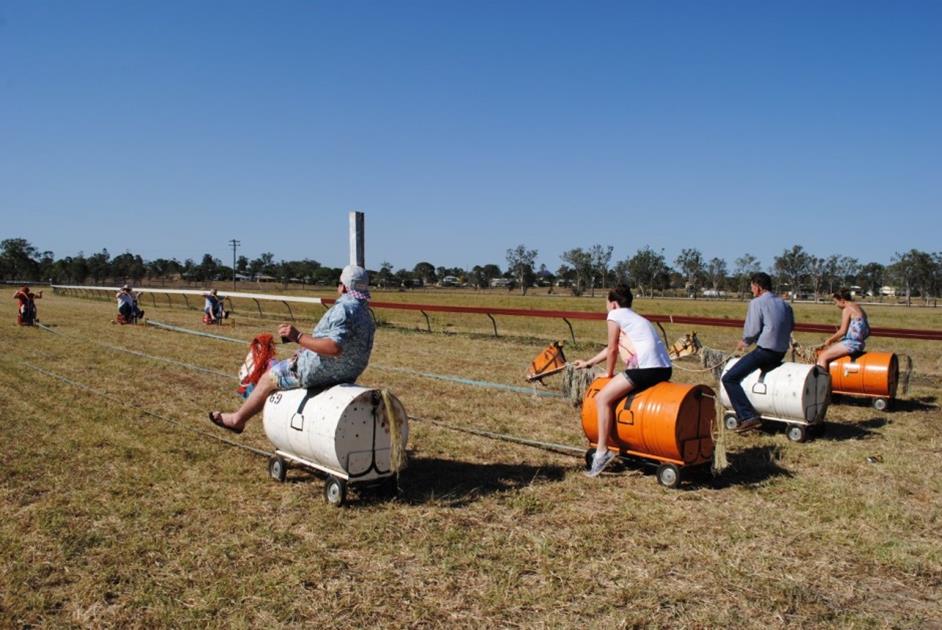 (Supplied Image) Racing Monto style – ‘Barrel’ horses and their jockeys vie for first place at Monto Race Club. The club will host its own Monto Melbourne Cup during its Breakfast of Champions from 8:30am onwards, Sunday 31 July.