A Planning Scheme identifies the zoning of a property: all land is in one of eight zones. The scheme also contains several ‘overlays’ that may also affect a property. After checking the zone and overlay maps (see Council’s interactive mapping) it is possible to determine if a development project needs Council approval. Development that is assessable (Code or Impact) requires a development permit. Some development may simply need to comply with a planning scheme code without the need for a development application. For full details and applicable planning provisions, please refer to the North Burnett Regional Planning Scheme. Council has a range of information sheets to help you prepare and lodge a development application.

Prior to making an application, Council recommends that you discuss the proposal with Council. This may take the form of a phone discussion or, for more involved proposals, a pre-lodgement meeting.

An application usually consists of the appropriate application forms, plans, town planning report, engineering report/s and the relevant application fee. Once the relevant information is collated you may lodge your application at any of the Council’s regional offices; email it to admin@northburnett.qld.gov.au or post to North Burnett Regional Council, PO Box 390, Gayndah Q 4625

For further information please contact the Development Services Department on 1300 696 272.

To download the Application Forms and Guidelines please click on the following link to the State Governments Department of State Development, Manufacturing, Infrastructure and Planning – https://planning.dsdmip.qld.gov.au/planning/better-development/application-forms-and-templates.

Categories of Development and Assessment

Does not require a development approval or need to comply with any planning scheme provision, however may still need approvals or licences under Council’s local laws or other legislation. 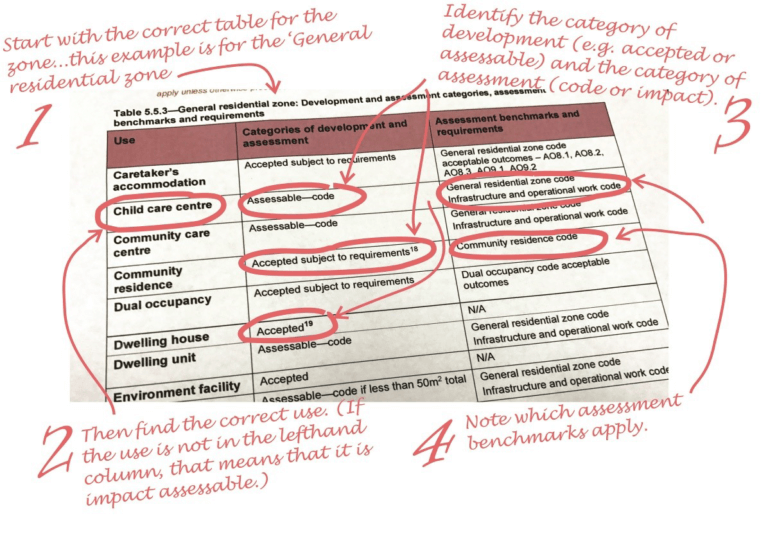 The Planning Act 2016 defines ‘development’ and its components:

(b) reconfiguring a lot; or

(c) making a material change of use of premises.

(a) creating lots by subdividing another lot; or

(b) amalgamating 2 or more lots; or

(c) rearranging the boundaries of a lot by registering a plan of subdivision under the Land Act or Land Title Act; or

(d) dividing land into parts by agreement rendering different parts of a lot immediately available for separate disposition or separate occupation, other than by an agreement that is—

(i) a lease for a term, including renewal options, not exceeding 10 years; or
(ii) an agreement for the exclusive use of part of the common property for a community titles scheme under the Body Corporate and Community Management Act 1997; or (e) creating an easement giving access to a lot from a constructed road.

– creating an access easement to allow vehicles to access the rear of a shop across adjacent land.

Material change of use, of premises, means any of the following that a regulation made under section 284(2)(a) does not prescribe to be minor change of use—

(a) the start of a new use of the premises;

(b) the re-establishment on the premises of a use that has been abandoned;

(c) a material increase in the intensity or scale of the use of the premises.

– starting a feedlot on vacant land;

– changing the use of a shop building by converting it to a food establishment;

– restarting a service station use that had been abandoned.

Operational work means work, other than building work or plumbing or drainage work, in, on, over or under premises that materially affects premises or the use of premises.

Some examples include filling land in a flood plain or constructing works for a subdivisional estate.

(i)building, repairing, altering, underpinning (whether by vertical or lateral support), moving or demolishing a building or other structure; or Example— building a retaining wall

(ii)works regulated under the building assessment provisions; or

(iii)excavating or filling for, or incidental to, the activities stated in subparagraph; or

(v)supporting (vertically or laterally) premises for activities stated in subparagraph

(b) for a Queensland heritage place, includes—

(i)altering, repairing, maintaining or moving a built, natural or landscape feature on the place; and

(ii)excavating, filling or other disturbances to premises that damage, expose or move archaeological artefacts, as defined under the Heritage Act, on the place; and

(iii)altering, repairing or removing artefacts that contribute to the place’s cultural heritage significance (furniture or fittings, for example); and

(iv)altering, repairing or removing building finishes that contribute to the place’s cultural heritage significance (paint, wallpaper or plaster, for example); and

(c) does not include undertaking—

(i)operations of any type and all things constructed or installed that allow taking or interfering with water under the Water Act 2000; or

– installing, changing, extending, disconnecting, taking away and maintaining drainage; and

Back to Planning & Development

Why have a Planning Scheme?

Superseded and Past Planning Schemes